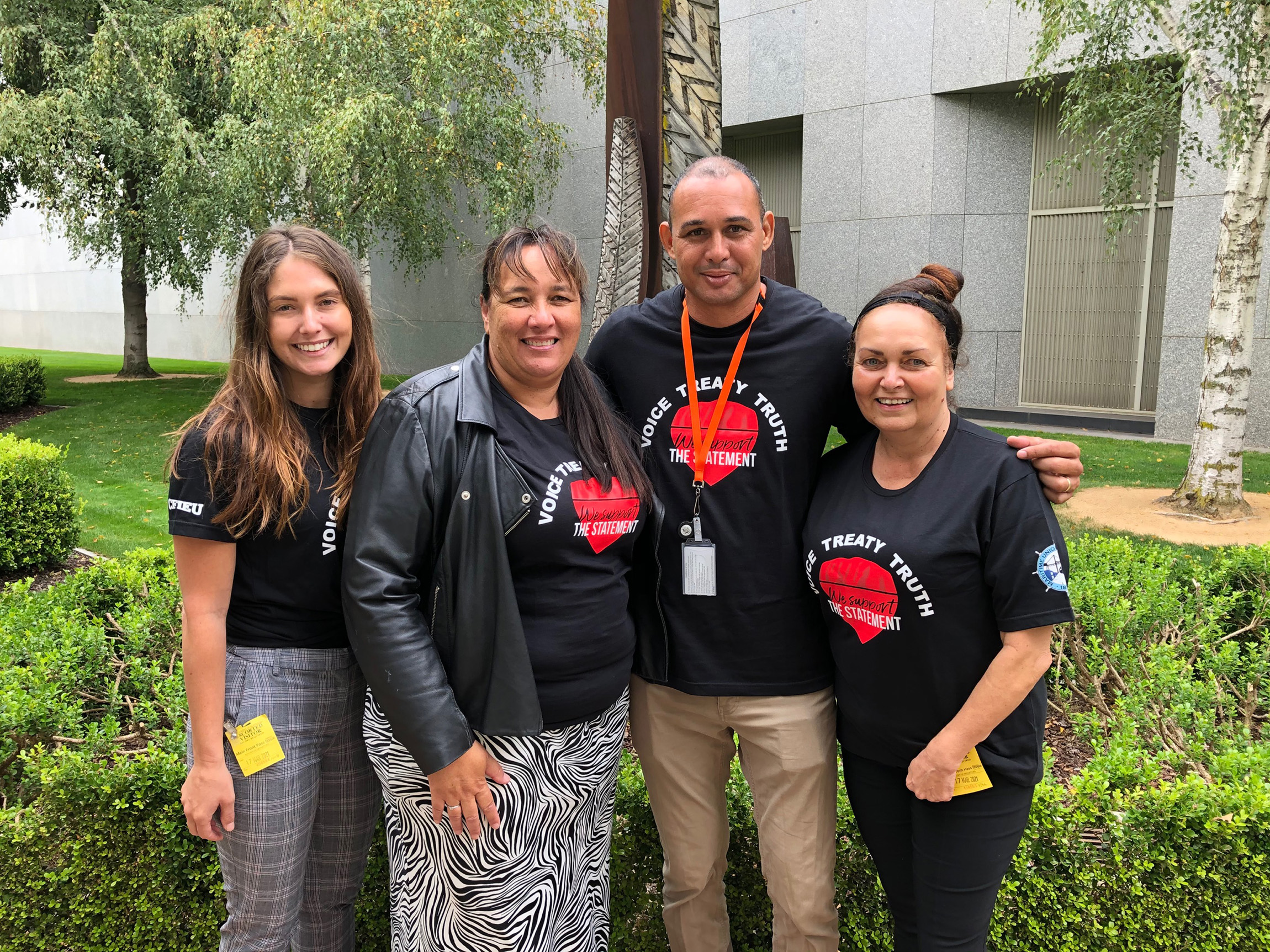 This week First Nations ASU members joined union members from across Australia to meet with politicians about the Uluru Statement. This was the biggest delegation of First Nation Union members at Parliament House ever.

Members attended Noel Pearson's speech at the National Museum of Australia. According to ABC News, "Mr Pearson urged the government not to give up on the decades-long push for constitutional recognition and reiterated his support for an Indigenous Voice to Parliament to be enshrined in the constitution, in line with the calls of the 2017 Uluru Statement from the Heart."

This week the Government also voted down a motion in the Senate to set up an inquiry into truth-telling and treaty-making. Senator Pat Dodson launched a scathing attack on the Morrison government’s lack of leadership on progressing reforms from the Uluru Statement from the Heart. Read more from The Guardian here.

Accept the invitation of the Uluru Statement from the Heart by endorsing the call for a First Nations Voice to parliament protected by the Constitution and signing up as a supporter.

The Australian Trade Union movement has a long, very proud and strong history standing shoulder to shoulder with Aboriginal and Torres Strait Islander peoples in campaigning for social justice, civil and industrial rights in the pursuit of equality and self-determination.

A foundation stone in achieving equality, by and for Aboriginal and Torres Strait Islander peoples, has been the journey to ensuring there are strong, self-determining, and representative structures of First Nations voices, a commitment to Treaty making and a process of Truth telling which will lead to true reconciliation.

The ACTU, Australian Unions and their members have been engaged in the ongoing national conversation for decades. Unions have worked with and walked beside Aboriginal and Torres Strait Islander people, through the 1967 Referendum, the ‘1Barunga Statement’ in 1988, the dialogue initiated by the Expert Panel on Recognising Aboriginal and Torres Strait Islander People in the Constitution in 2010, to now in the current campaign.

For more than 50 years the trade union movement has supported the voices, and campaigning, calling for an Aboriginal and Torres Strait Islander Voice, Treaty & Truth-telling process.

The Statement from the Heart

In May 2017, at the symbolic heart of our nation, 250 delegates convened at the Uluru Convention to discuss the progress of this long standing national conversation and bestowed on the nation and Parliamentary leaders the ‘Statement from the Heart’.

The Statement from the Heart conveyed a powerful message “In 1967 we were counted, in 2017 we seek to be heard. We invite you to walk with us in a movement of the Australian people for a better future.”

The delegates agreed on three (3) priorities – a voice to parliament, Makarrata Commission for treaty and truth-telling. Delegates considered a roadmap in achieving these aspirations.

What does this mean?

Voice to Parliament – including in the constitution a new Indigenous body advising the Australian Parliament. It would force politicians to listen to Indigenous peoples before they make laws that affect them.

Treaty – a long standing demand of Indigenous peoples. A ‘Makarrata Commission’ would guide agreement making between them and governments.

Truth-Telling – the ‘Makarrata Commission’ would also make sure that the true history of colonization is finally told’.

Amongst union members, and more broadly, the conversation around the need for and the process of potential constitutional reform is ongoing and continues to be an integral part of the national discussion.

Overwhelmingly Union members and their communities have shown absolute support for: a strong national voice of Aboriginal and Torres Strait Islander Peoples that comes from communities and gives representation from the grass roots; a Makarrata Commission to guide Treaty making between Aboriginal and Torres Strait Islander Peoples and governments; and Truth- Telling as a necessary step towards reconciliation.