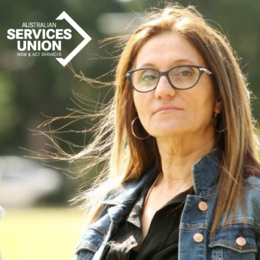 Mariam is an ASU legend - and today the union movement recognised her impact as a feminist and a unionist.

Mariam is a leader - and has been at the front of our campaigns to win Equal Pay and for 10 days paid domestic violence leave.

The award was presented today at the Unions NSW International Women's Day event with Michele O'Neil and Tanya Plibersek.

Rail Chaos: No Pay No Apology

Thousands of Sydney Trains and NSW Trains employees woke up this morning with no pay in their accounts.

Unions raised the alarm Thursday night but despite management having known about this problem overnight, the first acknowledgment didn’t happen until the next day. The next email in the early afternoon advised the problem was identified, and directed employees to their line managers to raise concerns. None of these communications took ownership of the mistake, or took the time to simply say ‘sorry’.

Sydney Trains and NSW Trains have admitted there is a serious issue and have assured unions it is being addressed but where is the apology?

Government turns back on women again

The Morrison Government has rejected a plan from its own retirement reviewer to pay super on parental leave - on International Women's Day.

Under this government, Australian women will still be worse off in their savings if they have a child. 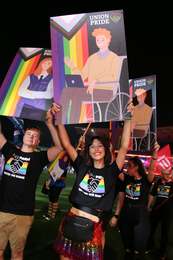 ASU members marched in Sydney's Mardi Gras this year - joining with union members from across the country. Union members have a long history of supporting equality and this year ASU members were proud to be part of the Union Pride float hosted by Unions NSW.

This year's theme was United We Shine. We highlighted frontline and essential workers who have helped get us through the pandemic, and through natural disasters like the bushfires and recent floods. 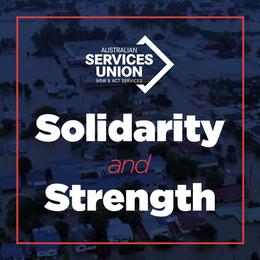 This information is for ASU members and delegates regarding the extreme flooding events in Lismore and the Northern Rivers Area. Our priority is ensuring that every ASU member is safe, and that essential services can continue to be provided.

Transport workers turned up to work today and found that the government has shut down their workplaces.

A new report from a Senate Committee into Job Security in Australia has found that job insecurity is "is damaging the physical and mental health of Australian workers, and it is holding back Australian wages and the Australian economy"

The final report by the Joint Standing Committee on the National Disability Insurance Scheme has said that “ambitious action is needed to adequately address issues within the NDIS workforce and to safeguard the availability of safe and quality supports for NDIS participants into the future."

ASU Jobs Connect is a free service for union members who are looking for work or would like some help taking the next step in their career.