Lina Cabaero speaks out about poverty 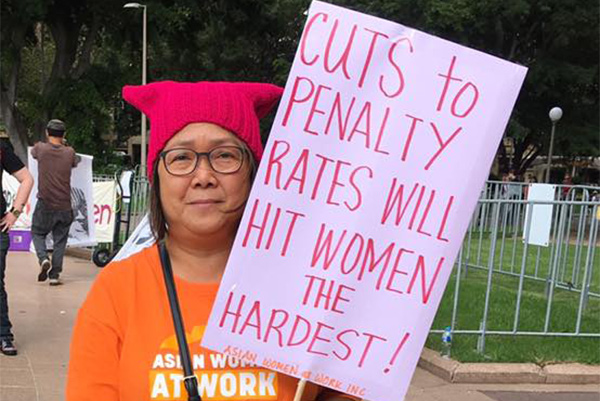 Lina Cabaero is an ASU member from Asian Women At Work, a Sydney-based community organisation with a membership of over 2000 Asian – mostly Chinese and Vietnamese - migrant women workers.

Their aim is to empower women individually and as a community to address the issues they face, improve their quality of life and facilitate their participation in Australian society.

As part of Anti Poverty Week 2017, Lina spoke at UnionsNSW’ Focus on Poverty Forum and told us the story of Thuy, a 38-year old Vietnamese woman who came to Australia nearly a year ago:

“She worked for 6 months in a Cabramatta nail shop and got paid $200 a week because she was on training, according to the boss. Recently, she found another job in a nail and beauty shop in the City where she gets paid $140 for a 10-hour work-day. She said she wants to save money to be able to buy a washing machine because she has been washing her husband’s and son’s and her clothes by hand for nearly a year now!”

“Asian Women at Work believe that the fight for workers’ rights is a fight against poverty.

We also believe that the union and community together is power. Together we can fight poverty.”