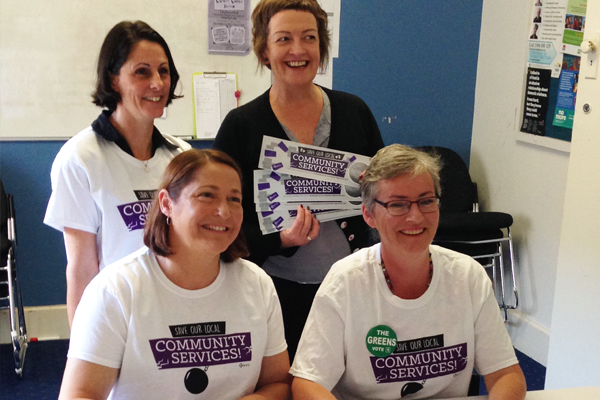 Shoalhaven Neighbourhood Services (SNS) and Shoalhaven Women’s Health Centre (SWHC) workers spoke to local candidates on Thursday about funding concerns and the future of community services in the region.

South Coast Labor candidate Fiona Phillips and South Coast Greens Candidate Amanda Findley both signed a pledge to protect local community services in the lead-up to the election.SNS administrator Maxine Edwards said funds will end for the centre in June 2016, but would be part of competitive tenders to see the future of the company remain.

“We have been here for 37 years and during that time we haven’t seen funding pressures to this level,” she said.“We are part of early intervention services.

Having local people within a local organisation means we are better suited to helping people and understanding what they can access in their area far easier than someone in Sydney.

“We’re worried that the funding we are after will go towards crisis management centres rather than early intervention resources such as us that help strengthen and build our community.

”Ms Edwards said she had seen changes in other areas and was worried.“Ulladulla lost four outreach programs in six months,” she said.

“We believe funding contracts should be for five years so we have more stability.

“At the moment we have had to put time limitations on our staff contracts, which we have never had to do in the past. There’s that insecurity with all our employees at the moment.”

“We will need to go up against services like Mission Australia and the Salvation Army and so on for this funding and we don’t even have a photocopier,” Ms Lumb said.“We are commercially disadvantaged before we even start.

“We also don’t see huge donations like those organisations do. Last week I think we saw something like $7.80 and we obviously can’t support our staff on that.”