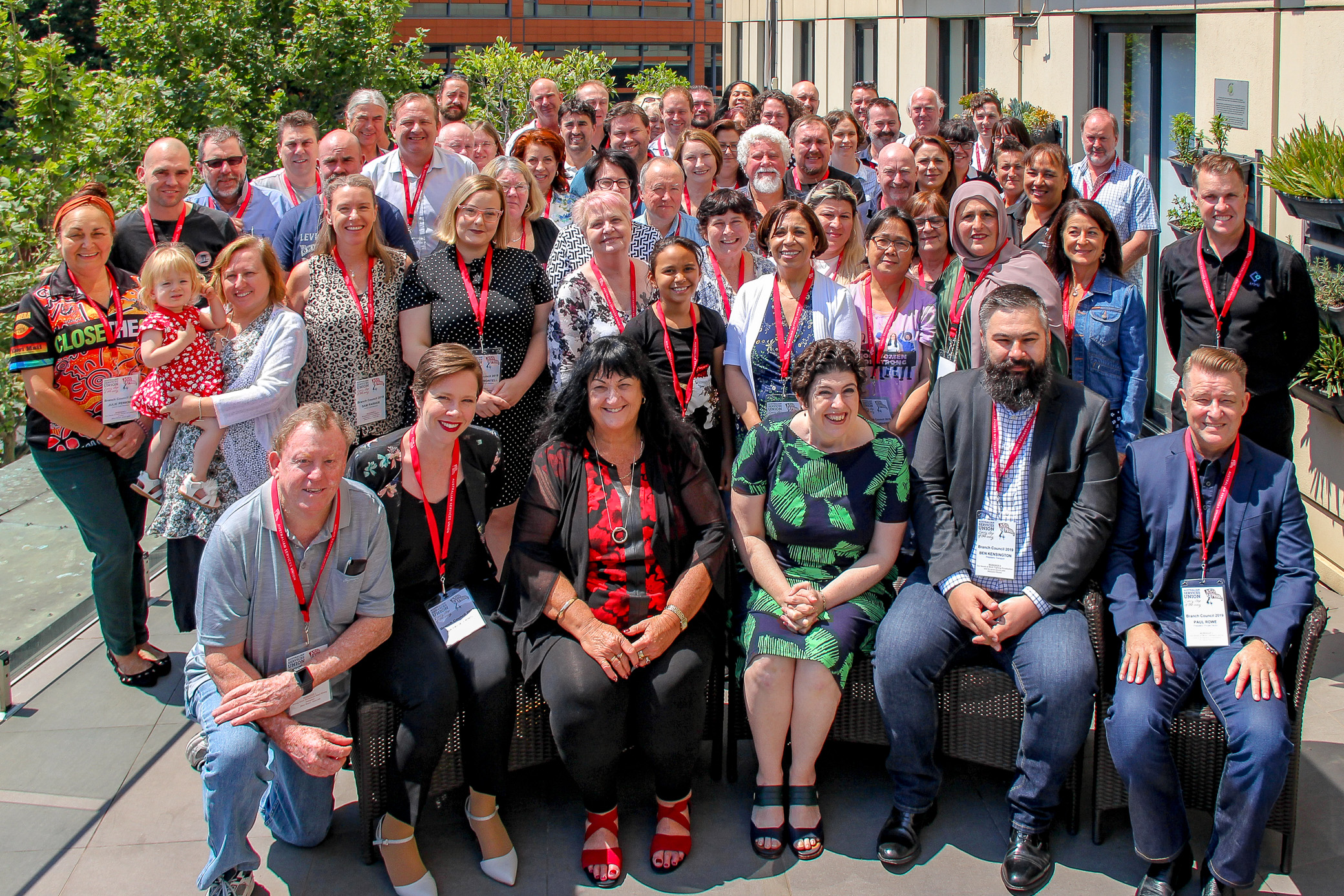 Your new pay rates from 1 December plus all the news from our 2019 Branch Council.

100 ASU delegates attended our Annual Branch Council in Sydney last week. From every industry and from all over NSW and the ACT - these delegates came together to plan for 2020. We committed to making sure the ASU is by your side in 2020, every step of the way.

We also reflected on some of our achievements of 2019.

It's been a big year, and we're ready for 2020. We'll be saving jobs, saving services and saving Equal Pay.

Thanks to the Australian Services Union – most community and disability workers will see an increase in their next pay.

The minimum rates of pay for community & disability sector workers go up again in the first full pay period on or after December 1st.

If you’re paid on Social, Community, Home Care and Disability Services Industry (SCHADS) Award it’s time to check your payslip to make sure you’ve been given your next union won pay rise.

In 2012 ASU members won a historic Equal Pay case that increased Award wages by 23% to 45%. These increases are phased in each July and December until December 2020.

Equal Pay was won by union members - and it’s up to us to protect it.

Equal Pay is under threat 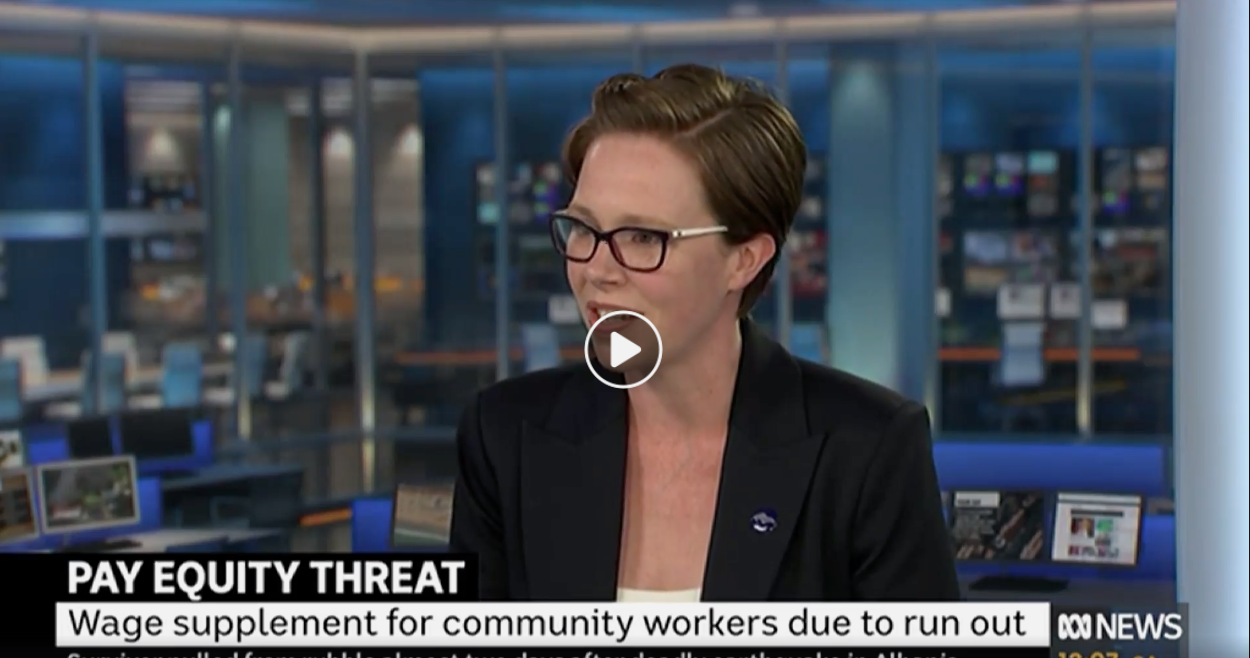 Last week we launched the Save Equal Pay Alliance - with over 40 civil society peak bodies and community organisations uniting to protect Equal Pay.

We are demanding that the federal government stop threatening our jobs and services and commit to ongoing funding for equal pay. They must make a commitment to services, to workers, to regional jobs and to the vulnerable and marginalised members of the community who rely on the community sector.

We fought for Equal Pay and huge pay rises – for 200,000 community sector and disability workers. Currently, ASU members are between $200 and $600 per week better off thanks to Equal Pay.

It didn’t rain pennies from heaven, we fought hard for Equal Pay. And we filed 100,000 pages of evidence in the Fair Work Commission, rallied on the streets, lobbied politicians – and even flash mobbed outside parliament house.

But now, Equal Pay is under threat.

Governments have not budgeted to continue funding Equal Pay meaning that jobs and services are under threat.

Be part of the campaign to protect our sector - join an Urgent Save Equal Pay Meeting near you or book an Organiser to visit your workplace.

International Day of People with Disability

Today we celebrate the International Day of People with Disability.

And a special shout out to all ASU members living with disability - we recognise the extraordinary contribution you make.

Are you an ASU member living with a disability? Have your say about how we can improve union accessibility. 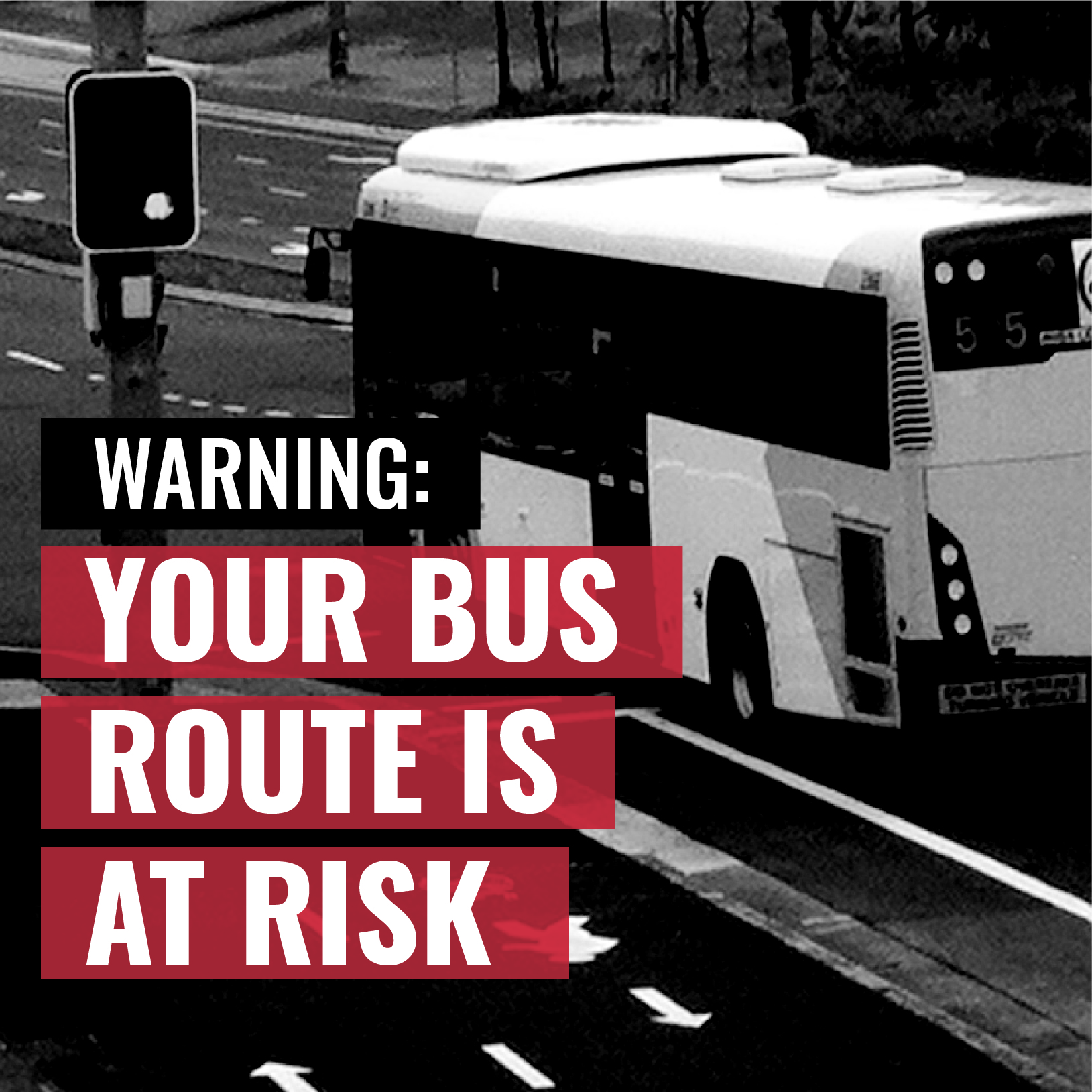 Before the NSW election, Gladys Berejikilan ruled out privatising any public assets and then in a backflip of betrayal, announced that NSW would sell off Sydney buses.

The plan to privatise all Sydney Buses in 2020 will see all buses in NSW being run by private operators for profit, not for our communities.

The privatisation of NSW services has been a failure. Transport for NSW statistics show that public transport consistently outperforms private operators.

ASU members who work at Sydney buses and across the transport industry have been running a petition, talking to commuters and rallying to make our voices heard.

Stand up for the ASU members who work at Sydney Buses and sign the petition to keep Sydney Buses in public hands! 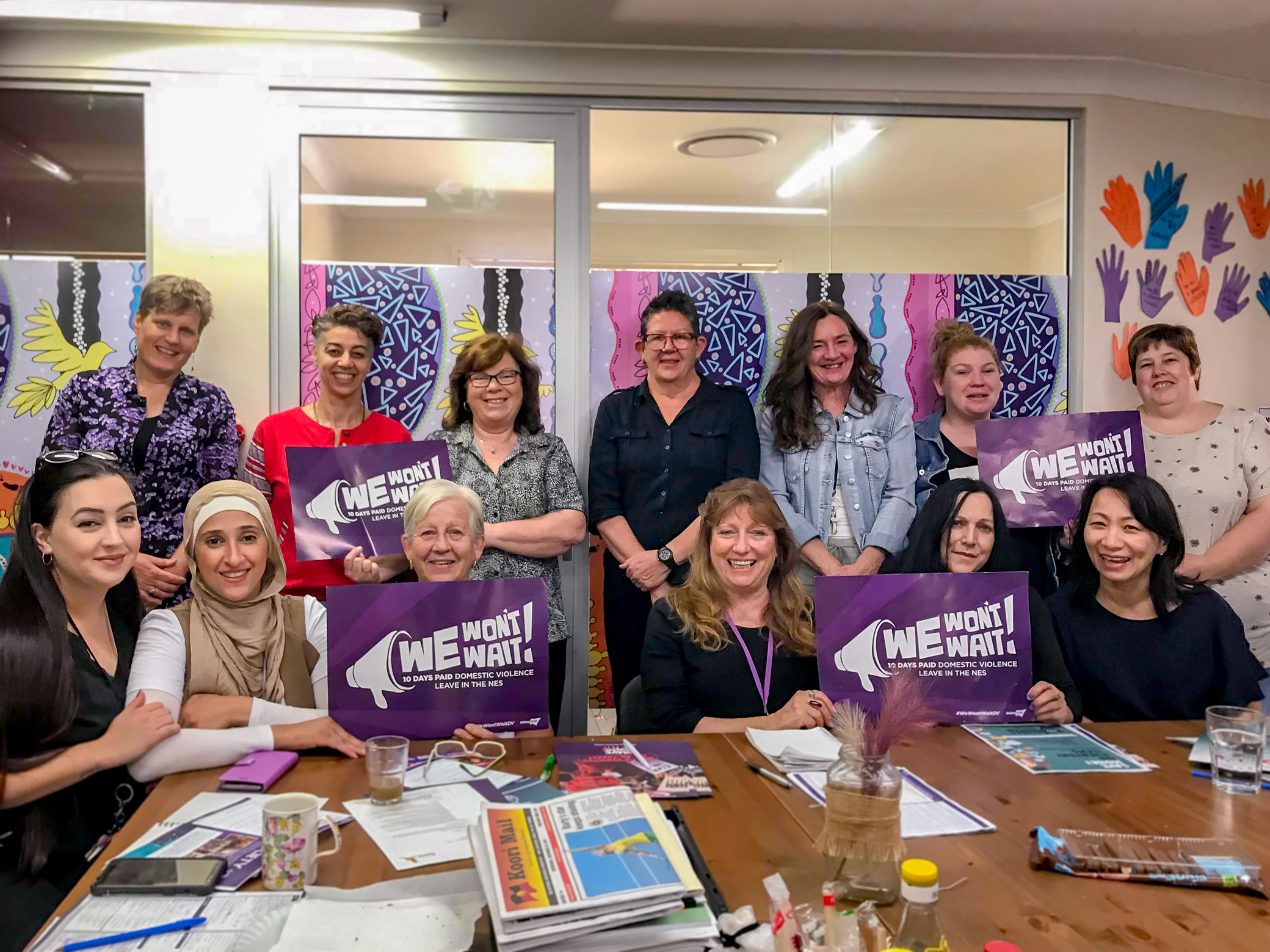 ASU members have been leading the We Won't Wait campaign for paid domestic violence leave since 2015.

Thanks to ASU members – today 1 out of every 3 workers in Australia now have access to this life-saving leave.

ASU members have won DV leave at Sydney Water, Qantas, Sydney Trains and NSW Train Link. We have won it at many community service organisations too.

Now, we need it for every Australian. It’s time for the Federal Government to step up

This year for the United Nations' International Day for the Elimination of Violence against Women and the 16 Days of Activism that follow, union members have been calling on the Federal Government to introduce the leave. We're asking workers across Australia to take a selfie with a We Won't Wait sign for a photo petition that we'll send to parliament.

Add yours using the hashtag #WeWontWaitDV.

Snap action to save the Tenants' Union 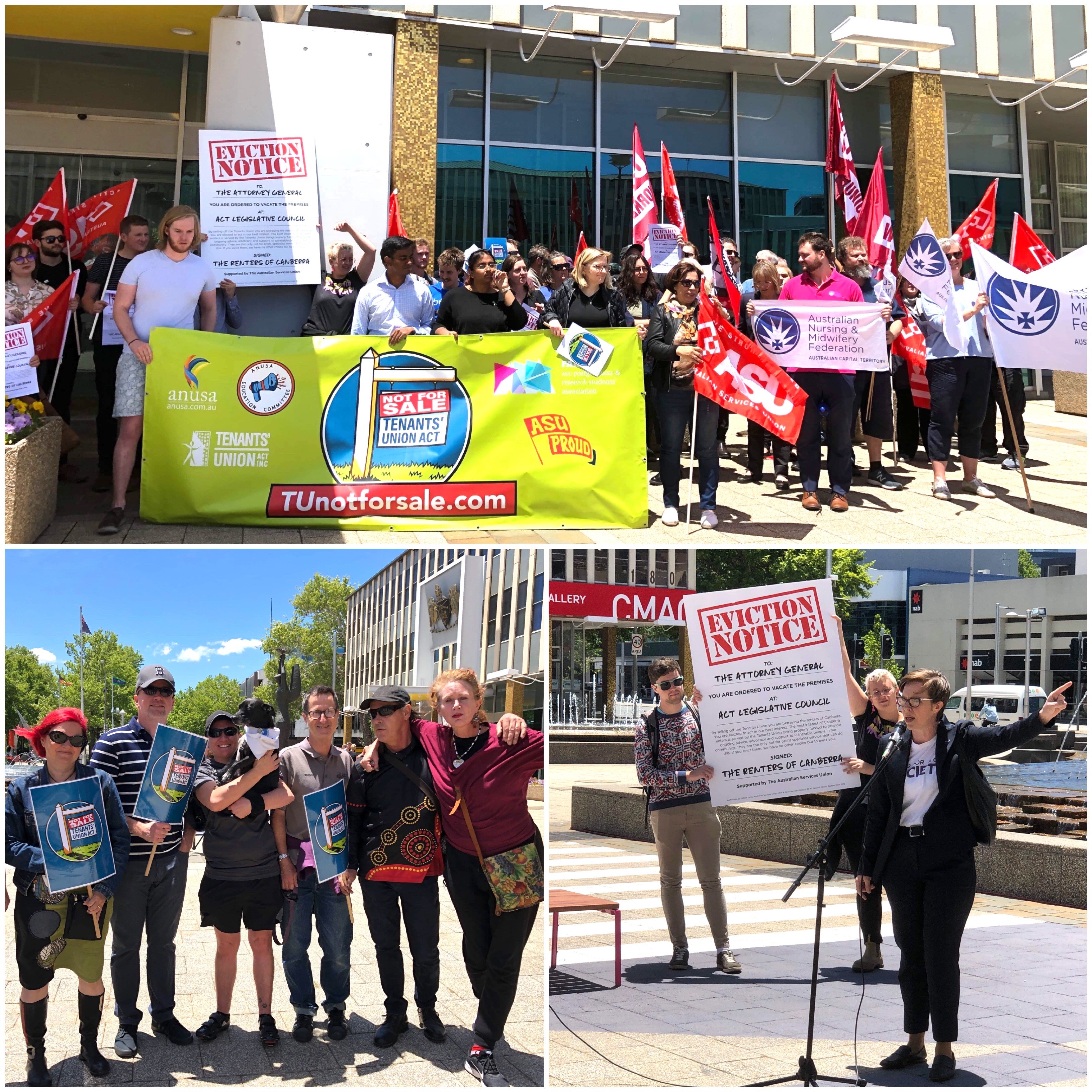 Today ASU members were joined by renters and community workers at a snap action to save Canberra's not for profit tenant advocacy service.

The independent, not-for-profit advisory service has been helping Canberrans since 1984 but its future was placed in doubt when the ACT Government announced a closed tender for the service. The Attorney General Gordon Ramsay called for lowest bidders to submit their price to buy the Tenants Union tenancy service by today.

In response, over 100 people rallied outside the Legislative Assembly today and served the Attorney General Gordon Ramsay with an eviction notice

We are calling on the ACT Government to fairly fund this essential community service. We already have 1,420 signatures and want to get to 2000.

After a concerted campaign by working people across Australia Scott Morrison's Union-Busting bill was defeated in the Senate.

Union members sent over 45,000 emails to the crossbenchers and flooded Parliament House with phone calls. Thank you to every union member who stood up for fairness.

Australian Council of Trade Unions' President, Michele O'Neil said, "The vote to defeat the Ensuring Integrity Bill is a victory for all working people in this country."

Delegate of the Year - Andrew Sheehan 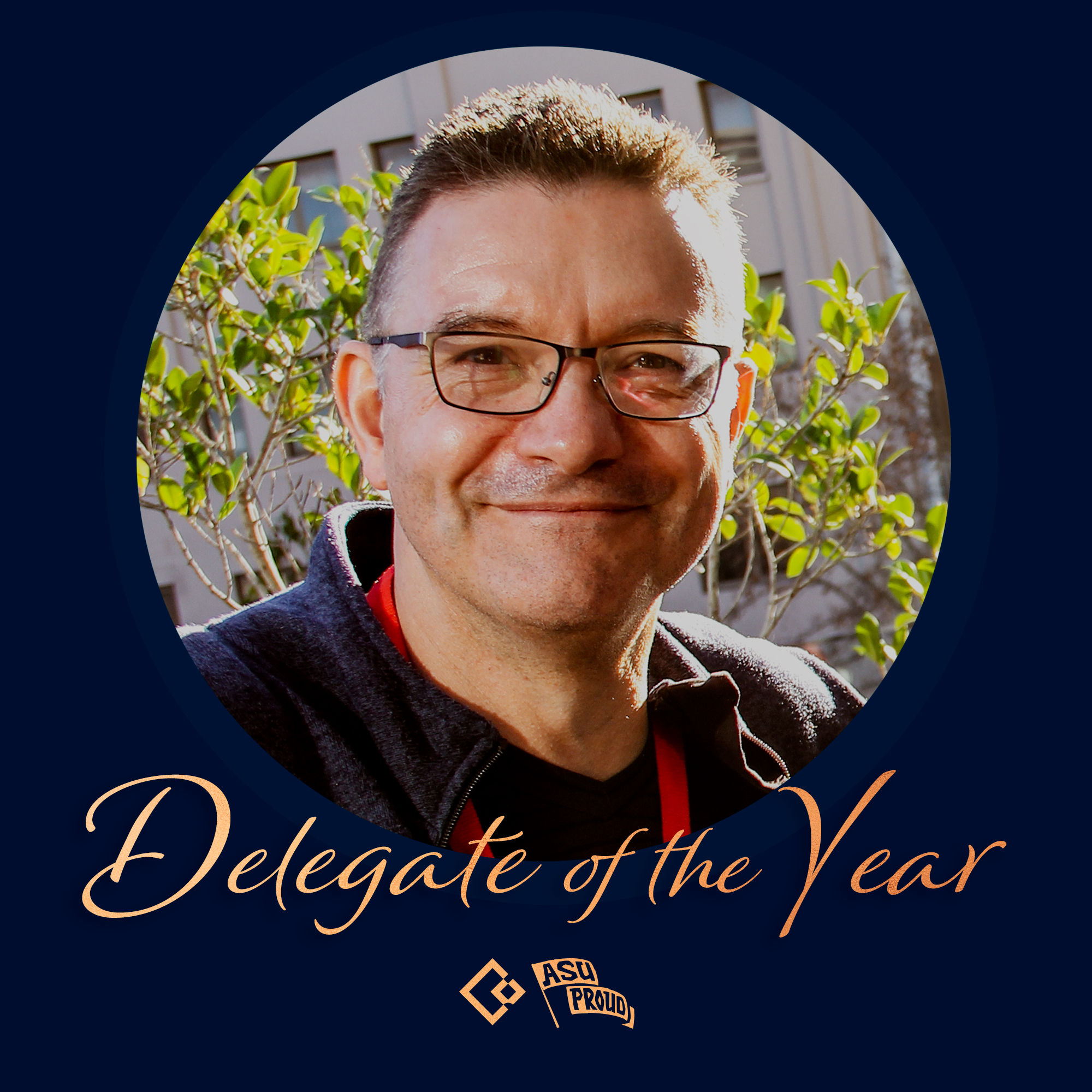 Andrew fought and saved over​ 100 ASU jobs in Canberra.  ​

Andrew is a Residential Care Worker and has been working with young people for over 10 years.

And Andrew reckons it's the most interesting job he’s ever had. Apparently, it’s even more interesting than when he was a band manager and tour bus driver and gave one of the Spice Girls a lift!

Premier Youthworks (PYW) was the major provider of residential out-of-home care in the ACT, until they announced that they were closing their doors in Canberra, with little notice to our members. This announcement could have left more than 100 workers without a job and vulnerable young people with no continuity of support or care.

Led by Andrew, members worked together to ensure all PYW workers had the opportunity to maintain their jobs and all of their current employment conditions.

This hard work led to an agreement with Barnardos ACT to employ ASU members directly when they took over the service.

In the last 12 months, Andrew has spoken passionately at ASU forums about the need to properly fund the Out Of Home Care sector and subsequently was invited to meet directly with ACT Minister Stephen-Smith to give her some insights into what it’s actually like working in the sector.

Andrew is a lifelong Tottenham supporter, a proud ASU delegate since 2015 and he sits on the ASU’s Committee of Management.

Andrew is an ASU legend - congratulations. 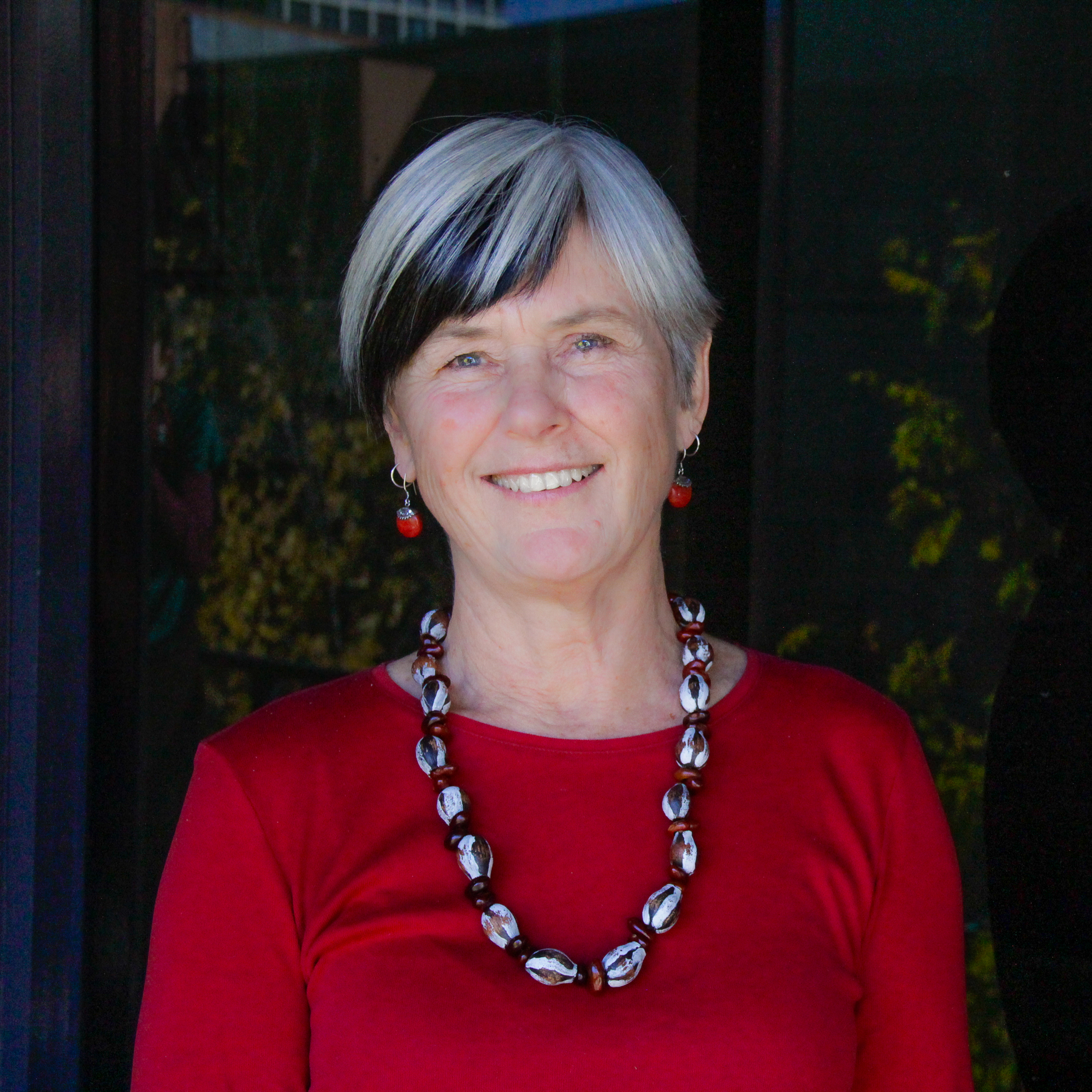 Lyn Bevington has worked in the community sector and been a proud ASU member since 1993.

She recently retired from the Coordinator of the Mountains Outreach Community Service in the Blue Mountains and also worked at the local TAFE teaching the next generation of community workers.

Lyn was elected to represent members on both the ASU Branch Executive and SACS Committee of Management for the last 8 years.

She also represented members on the Board of the Australian College of Community and Disability Practitioners.

For decades Lyn has been a formidable union activist in her local community of the Blue Mountains. She chaired the Blue Mountains ASU Branch meetings– coordinating ASU members' involvement in union and sector campaigns like Your Rights at Work Campaign, ASU Equal Pay Campaign, Save our Local Community Services Campaign and the Build a Better Future campaign.  She has recruited and mentored many younger members into their union to stand up for their sector and the people they support.

Lyn is also a strong supporter of Indigenous rights and activism –and is heavily involved in the Blue Mountains Australians for Native Title and Reconciliation (ANTAR) Group.

Lyn has also held positions on a number of committees and boards of grassroots organisations across the Blue Mountains  – including women’s health and community centres. As a former colleague of Lyn’s said “Lyn generously shares her leadership and wisdom to help strengthen other organisations and workers. I see no signs that Lyn will be slowing down in her strong and effective advocacy for issues around equity, access and social justice”. 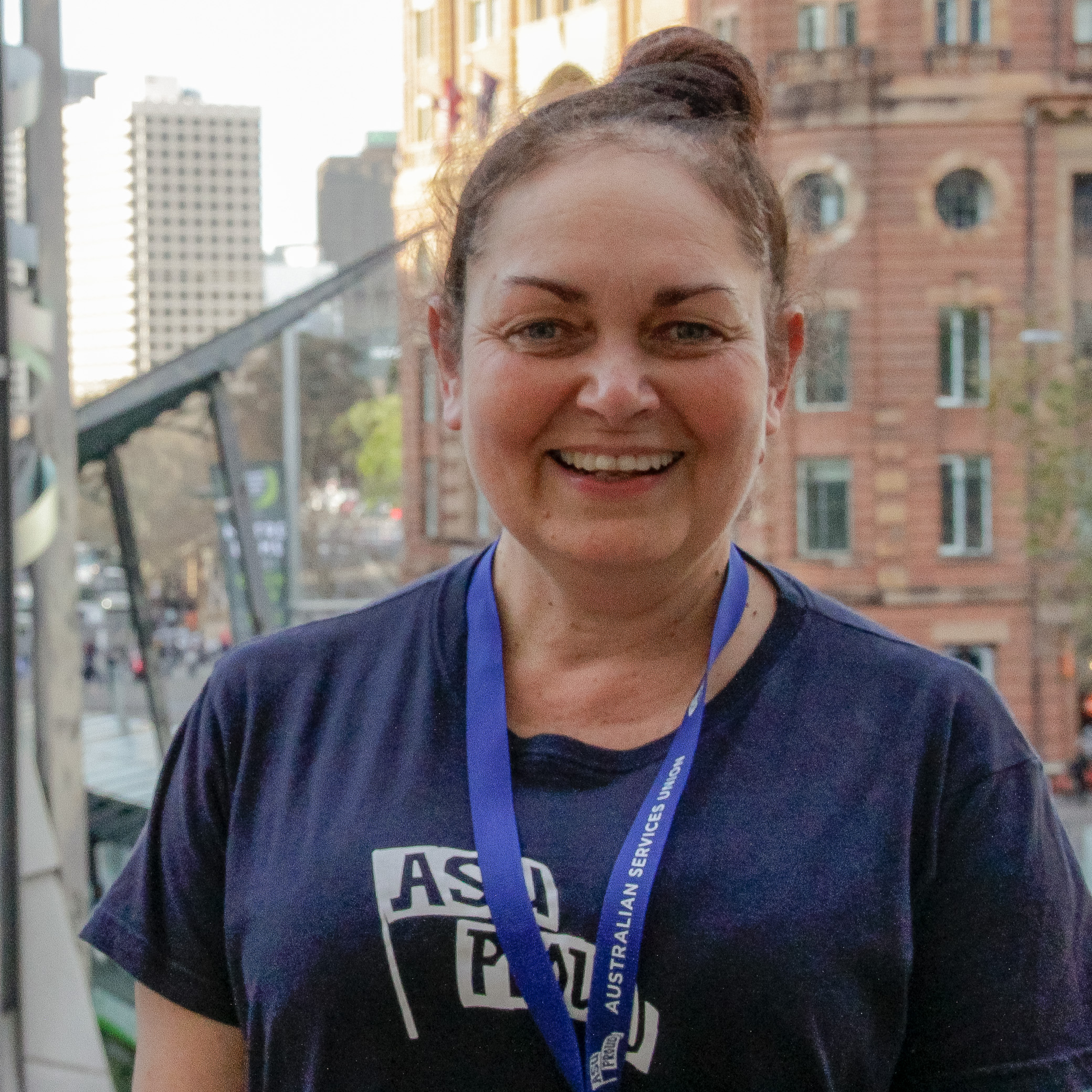 Julie Perkins is a proud Gumbaynggir woman from Corindi Beach near Coffs Harbour. Julie has been the chair of the Aboriginal Services Subdivision since 2014.

Julie was an active supporter of the ASU Equal Pay campaign on the north and central coast, as well as playing a prominent role as a delegate in the We Won't Wait and Save our Local Community Services and Civil Society campaigns.

Julie has worked tirelessly to build union membership at Aboriginal Legal Service and has increased membership dramatically around the state!

At ALS Julie has led the union bargaining team, representing all categories of worker, regional, remote, and metropolitan offices to participate in the bargaining process.

Julie has played a very important role working with the union to lobby federal and state politicians for better, secure and sustainable funding for ALS and indeed all community services. Julie is an active member of the UnionsNSW First Nations Committee. She's also a foundation member of the first Family Violence Prevention Service and Deputy Chair of the Family Law Pathways Program on the north coast.

Julie encourages and empowers women both in her organisation and in other community services. She works to promote their interests and support their campaigns.

Stand up for Super

Australia's universal superannuation system is the difference between poverty and a decent retirement for most Australians.

Members from the ASU are in Canberra this week calling on MPs and Senators to #standupforsuper and ensure every working Australian has a decent retirement.

We are speaking to senators about the $7000 the superannuation freeze has cost people who earn the median salary.

Right now superannuation is not paid if you earn less than $450 per month. This means people who work multiple jobs or are low income earners often don't earn enough to receive any superannuation. We must pay super on every dollar earned.

This is why we need to #standupforsuper