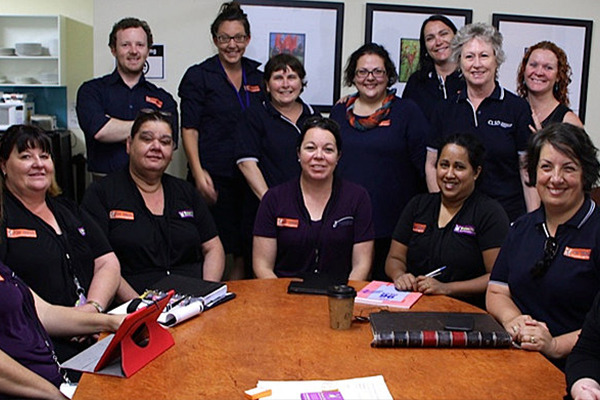 As Jacqueline Breen reports, centre staff say they're relieved that this time their cries for help have been heard.

ANSWERING MACHINE MESSAGE: You have reached the Far West Community Legal Centre. Given that we have no financial security from first of July 2015 and we have a high-level legal case load we will no longer be able to provide any new advice but we are happy to refer out.

JACQUELINE BREEN: People in the remote mining town looking for legal help, many of them victims of domestic violence, have been met with this message in recent weeks.

The Far West Community Legal Centre, which services Broken Hill and isolated communities like Wilcannia and Menindee, was due to lose a third of its funding at the end of June.

(Sound of screaming and laughing)

ELIZA: They reversed the cuts…

TRACEY WILLOW: … this is just the best moment.

ELIZA: Yeah put the news on, come inside, come to the CLC!

All seven state and territory attorneys-general wrote to Senator Brandis, urging him to reverse the cuts.

The Broken Hill CLC has been at the forefront of the campaign.

Tracey Willow is the centre's CEO.

TRACEY WILLOW: We were facing the prospect of annihilation. We were facing... I cannot tell you what it means, that we finally, people, workers, community members, stood together and said "this is wrong and we need the Government to listen to us" and right now they did.

JACQUELINE BREEN: Last month the ABC's Background Briefing report heard from one of the centre's clients, Georgia, who came for help after her partner tried to kill her - twice.

GEORGIA: He walked over to me while I'm feeding the baby and grabbed me by the throat. Stood me up out of my chair and cut my wind… basically cut my windpipe off, to the point where I couldn't breathe (begins to get upset) and my eyes started to glass over and that's when he let me go.

But two days before that we were having another argument and he came up from behind, grabbed me by the hair and dragged me down to the ground and held scissors to my throat (begins to get upset) in front of our three kids and was pushing them into my throat, telling me he was going to kill me.

JACQUELINE BREEN: Georgia says, as a former drug-user, without the legal centre she would not have had the courage to leave the relationship and go to the police.

GEORGIA: Because I never thought I'd do it. (begins to get upset) I never ever thought I would actually stand up to him like that (crying). I didn't even know that I could get away from him, I just thought I was stuck there for life basically.

JACQUELINE BREEN: Today Senator Brandis said that a national conversation around domestic and family violence has been gaining momentum over the past 18 months. He says it's a conversation the Government is determined to lead.

For staff at the Broken Hill Community Legal Centre, it's a conversation that never stops.

TRACEY WILLOW: To have a reversal of this impact that's going to not just benefit our service but services like ours across Australia, but particularly in rural and remote communities, this is just beyond belief.

I just didn't think it was going to happen in Broken Hill today that I would hear this news.