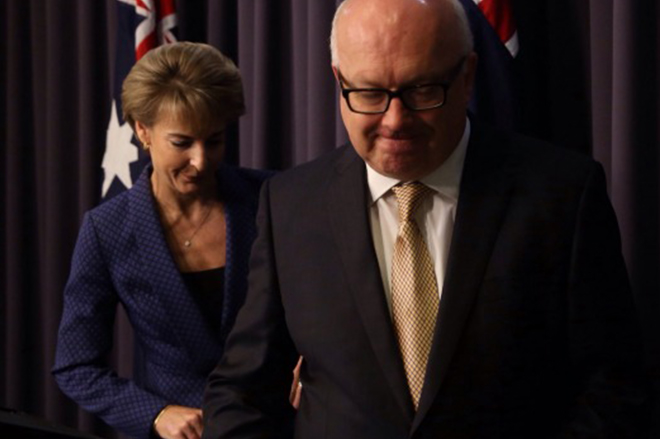 However, cuts to advocacy services will remain.

"On due consideration, the government has decided that the economies announced in the 2013 MYEFO [mid-year economic and fiscal outlook] affecting this sector in particular are economies that should be rethought and now as I say, should not proceed," Senator Brandis said.

Prime Minister Tony Abbott "ultimately" made the decision to reverse the cuts, he said.

The Productivity Commission on Access to Justice Arrangements last year recommended that cuts to indigenous legal services be reversed and that $200 million more be added to the legal assistance sector to meet widespread need across Australia.

Senator Brandis said given many of his friends are in the legal community, he was well aware the impact the budget cuts announced late last year would have on frontline services.

"I have been close to the community legal sector all my life, many of my friends work in that sector," he said.

"I needed no explaining how resource-constrained that sector is…I'm extremely happy that the Prime Minister in consultation with Senator Cash and [Indigenous Affairs Minister Nigel] Scullion and I has decided to authorise the announcement we make today," he said.

When asked why he agreed to cut the services he knew were so critical on the frontline, the Attorney-General said: "Let's focus on the good news that we're announcing today."

But when pressed, Senator Brandis blamed the decision on the Coalition inheriting from Labor a "budget trainwreck" worse than they expected.

"Every portfolio was asked to identify cuts, with the passage of time and a greater appreciation of where the needs lie, where the priorities lie, we are taking what you might call a nuanced approach," he told reporters.

In a blistering letter sent to Senator Brandis earlier this month, all state and territory attorneys-general warned of a "crisis" in legal assistance funding and described further cuts as "short-sighted and ill-conceived".

On Thursday, the federal Attorney-General singled out his conservative NSW and Northern Territory counterparts for praise and said they were "instrumental" in the policy reversal.

NSW Attorney-General Brad Hazzard told Fairfax Media: "A big thank you to George Brandis and the federal government on behalf of all vulnerable communities across NSW - indeed, across Australia.

"Access to justice is a cornerstone of Australian democracy and I'm sure Attorney-General Brandis had some very heavy discussions with Treasury to win out on behalf of those communities.

"Another plus out of this is that we have a very combined view now across all of the state attorneys-general on these sorts of critical issues and that will help us to work more consistently with the federal government on the big issues."

Asked about the cuts to advocacy services, such as the Environmental Defenders Service, which will remain in place, Mr Hazzard said the federal government had a "slightly different view" to the Baird government.

Successive federal governments' contribution to legal aid commissions have dropped from about half to a third of all funding since 1997.

"Over 60 per cent of all the work that's being done around Australia for either domestic violence or family law is being done by legal aid commissions," she said, with community legal centres designed to take on cases that they were not able to.

"If we really want to improve services to the public there has to be injection of funds to legal aid commissions," said Ms Canny, who is also the director of the Legal Services Commission of South Australia.

Shane Duffy, the chairman of the National Aboriginal and Torres Strait Islander Legal Services, said the group was "thrilled" that the cuts would no longer be made.

But he said "the government also needs to know that the funding provided is not enough to meet the legal needs of Aboriginal and Torres Strait Islander communities".

"The Productivity Commission's recent report said $200 million more was required just to address urgent need and we call upon the government to take heed of this recommendation."

Liana Buchanan, the chief executive of the Federation of Community Legal Centres Victoria, said many centres had already reduced their lawyers and wound back services in preparation for the planned funding cuts.

"Today's announcement will halt that damage, but we need to ensure not just that we prevent further damage to a system in crisis, but that the system is properly funded to ensure that vulnerable people are not turned away from free legal help," she said.

"The Attorney-General claims that his priority is 'cases over causes', but we know that advocacy is a vital task for community legal centres in preventing legal problems that would otherwise increase the number of cases that walk into our centres every day, and this has been clearly acknowledged by the Productivity Commission," Ms Buchanan said.